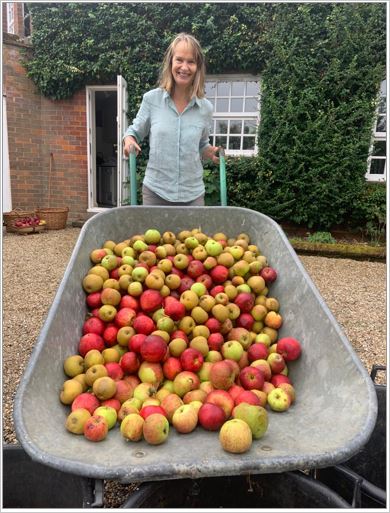 On Sun 19th of September, we held a terrific Apple Festival in aid of the Sarratt Community Garden. Mel and David Boda of Ramillies, the Green (the one with the yellow front door!) showed incredible generosity back in April by offering the use of their hidden gem of an orchard to help in some way with the Community Garden. We agreed on an Apple Festival and thought no more about it until August, when it suddenly seemed to be rather close at hand, and with a huge pile of builders’ rubble right in the driveway… Nevertheless, we pressed on with our plans, and the builders duly moved the heap – on the Friday afternoon before the event!
The whole Boda family got thoroughly involved, making a treasure hunt, apple cakes, stringing up bunting, putting up gazebos, and enjoying some trailer rides along the way, not to mention storing vast quantities of apples, plants and 2 enormous cast iron apple presses. What hard work and kindness.

The forecast was not looking good for Sunday, but when it came to it, the rain kindly held off, and we had a brilliant afternoon, full of every age and stage. Lots of people brought apples along to press, and huge thanks go to Anne and Roger Dudley, and Mike Lewis and Daniela Haller for letting us loose in their orchards – it’s amazing how little juice each apple yields, so we needed a decent quantity!
Rob and Jim Garvey were overseeing crushing and pressing, with various helpful volunteers doing a stint at chopping, and then the juice was poured out for people to help themselves to – there were some brilliant ‘sour’ faces pulled by people who had got juice from a predominantly cooking apple batch!

Anne and Roger ran an Apple Tasting stall, which was good fun and eye opening, Daisy and Sasha were the queens of the preserves, Annie was on pollinator-friendly plants, Sue ran an informative bee stand, Rachel and Sarah dished up tea and cake, Mel and her boys did woolly apple pompoms and face paints and Alan ran a popular bakery stall which suffered a run on Micklefield Hall sausage and apple rolls, so popular were they!
I am particularly pleased that, with over 100 visitors, we generated less than the volume of a large apple of non-recycled waste – it can be done!

Huge thanks are due to all of the people mentioned above, and particularly to my champion husband, Rob, who gave his whole weekend to support this, despite being under a lot of pressure at work, and to the Boda family, without whose generosity it could not have happened. We raised around £600 – a not insignificant amount which will make next year in the Community Garden much easier. Thank you for coming, and see you next year….?
Flo Garvey