New Bees on the block in Sarratt, just in the nick of time for World Bee Day – 20th May! 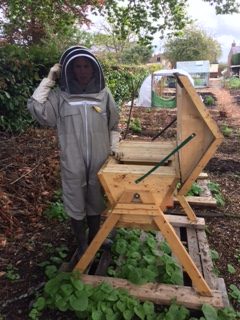 Sunday the 16th of May, a call came from Chesham to Flo and Sue in Sarratt that a swarm of Bees could hopefully be moved into the new Sarratt Community garden behind the Sarratt store, where a recently fabulous new residence has been put in place ready for some new bees to move into.

Great news, with calm and an expert hand they have moved into their new residence and we welcome them!
Well done Flo and Sue !!
(If you have an allergy to bees, then have an epipen at the ready when visiting the community garden)….
not that we are expecting any stings! Bees are far too busy for that sort of sting!  Very exciting for the community garden.

No life without bees.

In addition to being one of the major pollinators, thus ensuring food and food security, sustainable agriculture and biodiversity, bees significantly contribute to the mitigation of climate change and environmental conservation. In the long-term, the protection of bees and the beekeeping sector can help reduce poverty and hunger, as well as preserve a healthy environment and biodiversity. Scientific studies have proven that bees have become increasingly endangered.  It is only through joint efforts that we can ensure the protection of bees and their habitats.

The three-year path towards the proclamation of World Bee Day.

For this reason the Slovenian Beekeepers’ Association launched the initiative in 2014, advocating that 20 May becomes World Bee Day. The initiative was supported by the Slovenian Government, which strove to realise it.
In September 2015, the initiative was backed by the largest international beekeepers’ organisation,  Apimondia (press release).
In the framework of this initiative, the Ministry of Agriculture, Forestry and Food travelled around the world with a pavilion Bee World and actively promoted and provided information on the initiative as well as other related projects. The Ministry also held a number of bilateral meetings with representatives of other countries and international organisations, and organised various events for experts.
On 17 November 2017, after more than three years of effort, the UN’s Economic and Financial Committee adopted a resolution proclaiming World Bee Day. On 20 December 2017, the resolution was unanimously backed by the General Assembly of the United Nations in New York, thus designating 20 May as World Bee Day.
The initiative was supported by all UN states, while 115 countries also acted as co-sponsors, including major countries such as the USA, Canada, China, Russia, India, Brazil, Argentina, Australia, and all EU Member States.